Its always good to get some moth trapping in at a new place. At Allt Beithe, this isn't strictly true as I have trapped here before, in June 2010, but this is my first autumn session in the west highlands of Scotland.

The habitat is wet acid heathland and bog with wooded hills nearby. Being very remote there was no external light pollution from street lights etc and my trap could be seen for miles!

The species in red are new ones for me, but there are others in the list that were also good to get in bigger numbers than usual... 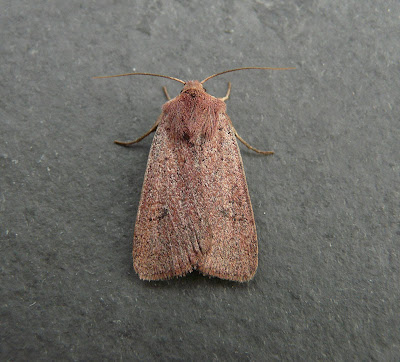 And not new but good to get -

An excellent catch with three new species for me - Ypsolopha scabrella, Orange Sallow and Haworth's Minor. There was definitely an arrival of moorland species in my garden last night with the above minor plus 2 Heath Rustic, 6 Ear Moth agg, Small Autumnal...

Along with a full house of Yellow Underwings and 4 Sallow sp what's not to like!

In autumn 2009 I started moth trapping in my garden using a Skinner trap borrowed from Tom Tams, the then Northumberland Moth Recorder.

Pleased with the results, I bought a 125w MV Robinson trap and didnt look back.

For details of moths caught before October 2010 check out my 'From the Notebook' blog...