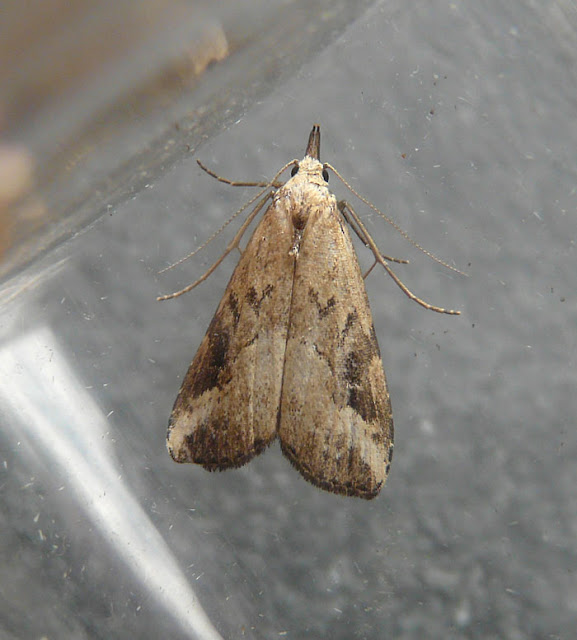 Pinion Streaked Snout.
At first glance this little non-descript chap looks like a micro moth, but I soon remembered those small triangle shaped things at the back of the Lewington Guide. The 3 records in 2010 in Northumberland were from my garden...
Posted by Stewart at 17:25 No comments: 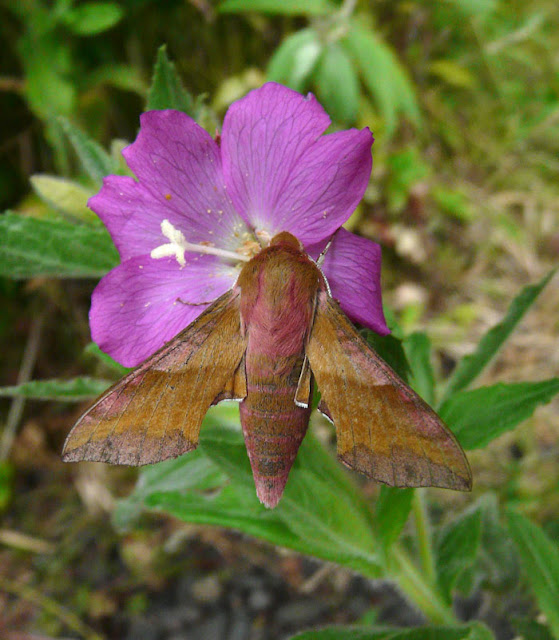 Small Elephant Hawkmoth
Hawkmoths are in short supply this far north. Only Poplar Hawk and Elephant Hawk are common enough to be an expected annual addition to the garden list, so this single porcellus was welcome alongside its larger cousins.
Only two were taken in Northumberland this year. As it is a species of the dune grassland, it was a lucky catch. I wonder if it will repeat in 2011...
Posted by Stewart at 19:56 2 comments: 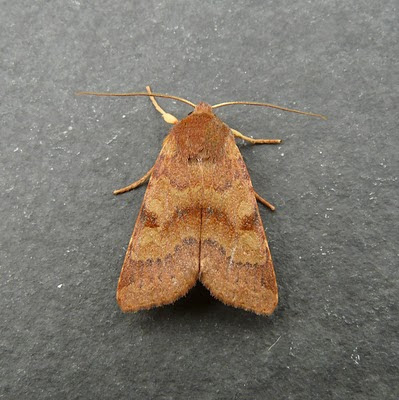 Flounced Chestnut
These are common autumn moths in my garden, with 44 being trapped this year with a maximum one night count of 10 individuals on 15th September. To put this in some sort of context though, there have only ever been 118 individuals recorded in Northumberland with previous year totals throughout the county as follows -
2010- 47 see above.
2009- 5 all also in my garden.
2008- 2
2007- 1
2006- 1
2005- 2
It seems incredible that one site can catch so many of what seems to be an unusual species in the county.... I will be interested to see if this happens in 2011.
Posted by Stewart at 22:38 No comments: 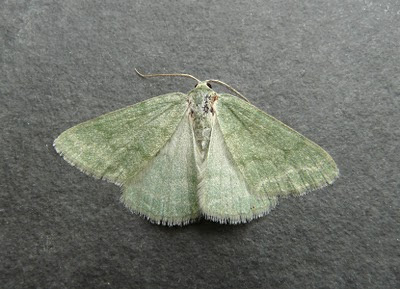 Grass Emerald
This one threw me when I first saw it. I am quite familiar with Large and Light Emerald but this one was different, and we don't get Common Emerald here. After some hunting I found it in a different genus in the field guide.
They are a scarce moth here, I'm not sure about elsewhere, but the two in my garden were the only ones in the county this year. In the last decade the maximum number caught in a year has been only 7, so its a nice one to get....
Posted by Stewart at 18:14 3 comments: 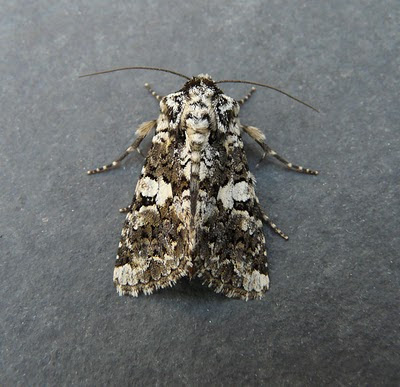 Marbled Coronet.
Three of these chequered beauties graced my garden this year. They look like a monochrome Mervielle du Jour. Although there were 10 caught in Northumberland in 2010, only 1 in 09, 2 in 08 and none in 07 shows what a scarce species they are. In Northumberland they seem to be a coastal species...
Posted by Stewart at 19:38 No comments: 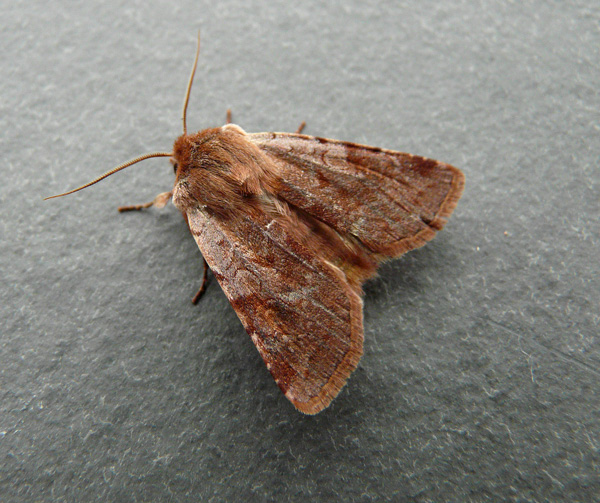 Red Chestnut.
Nice spring moths, these. I've done well for them in the garden, having trapped 33 of only 34 caught in Northumberland this year. This is probably due to people not going further afield trapping when these are on the wing in April.
I look forward to my next one...
Posted by Stewart at 19:54 2 comments: 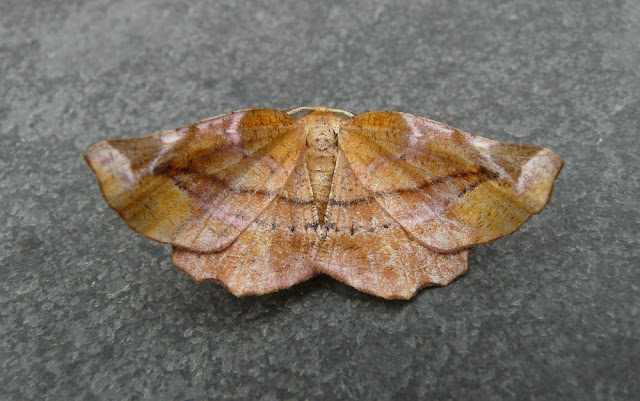 Lilac Beauty.
This was an unexpected species in my garden. Only one caught and, as it turns out, the only one in Northumberland ﻿this year.
There are have been 81 individuals caught since 1900 in the county, but in the last decade they have only been caught on 'even' years with no more than 2 per annum, and more usually only the one every two years. I have been very lucky to get one!
I dont hold out much hope of a repeat in 2011 of this cracking moth. It looks more suited to southern climes....
Posted by Stewart at 23:17 1 comment:

As this year looks to be done and dusted as far as moths are concerned I think I'll stick a few posts in with my personal highlights from the garden and beyond...In no particular order... 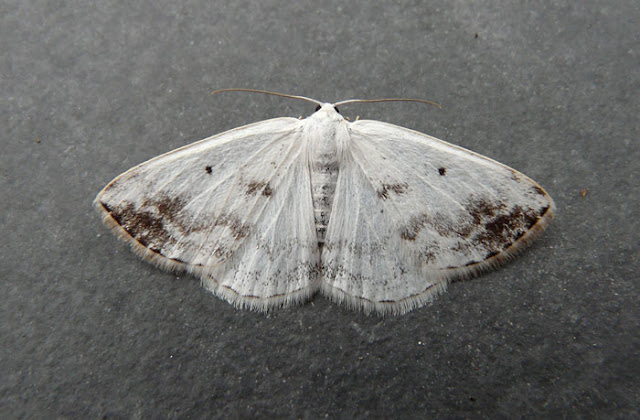 No1. Clouded Silver.
Only a single specimen of this lovely moth was caught this year. In the early hours of 23rd May I was up to cover the trap and it was lucky I did, because this one was resting outside on the rain guard.

First recorded in Northumberland in VC68 at Fenwick Wood in 1970, it was closely followed by a second at Belford in 1971. Since then it has become a widespread species with 160 records of 241 individuals from 52 sites.

2010 has been the best year for them so far in the county with 45 records.

I was well impressed with this one, a little cracker.
Posted by Stewart at 22:32 2 comments:

I didn't put the trap out last night. I couldn't get motivated.

On my way to a friends Christmas 'do' though I counted no less that 5 Winter Moths in the car headlights not far from home.

With the big freeze entering a second phase later this week, I might just cut my losses and look forward to my first moth of 2011. I bet its a Chestnut...
Posted by Stewart at 19:09 2 comments:

On my way home from work at 6.15pm tonight, the thermometer read zero degrees and snow was falling quite steadily. Under the trees near home a single Winter Moth fluttered and dodged between the flakes.

My only insect for a few weeks and I bet its a while before I see another. Unless the predicted mild spell on Friday tempts the Robinson back out...
Posted by Stewart at 23:02 4 comments:

In autumn 2009 I started moth trapping in my garden using a Skinner trap borrowed from Tom Tams, the then Northumberland Moth Recorder.

Pleased with the results, I bought a 125w MV Robinson trap and didnt look back.

For details of moths caught before October 2010 check out my 'From the Notebook' blog...